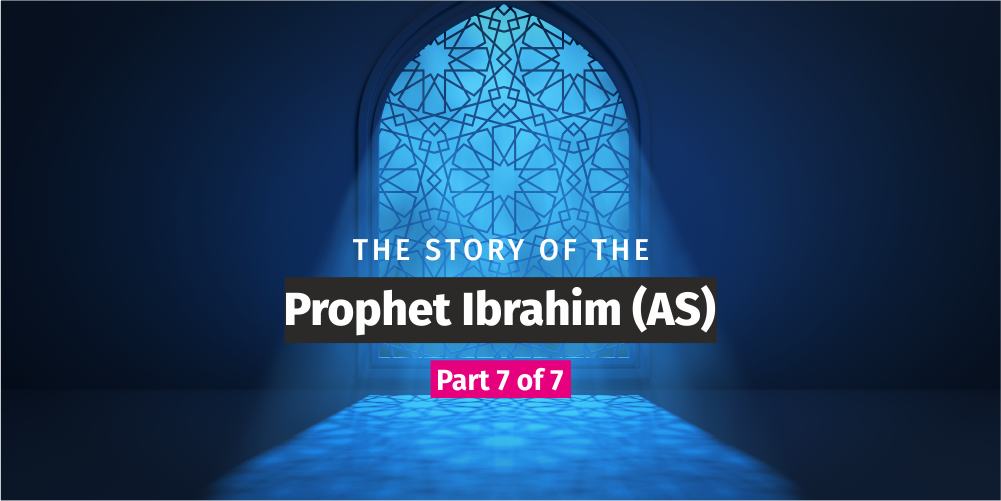 There is no doubt that in the life of Ibrahim (as), we can derive many lessons. It is amazing to see just how many of his acts of worship are part of our worship today. Allah (swt) loved them so much, that He wished it to continue. Read on to see just a few of these in Part 7, the final part of this series.

The relevancies of the story of Ibrahim (as) on us today

The story of Ibrahim (as), his life, and some of the different situations he faced are applicable today in many ways. The ones that have been mentioned in this series are:

The oneness of Allah (swt) and that nothing else should be worshipped except Allah (swt). We can see the importance of logic and reason to nullify the creation of an idol from wood or stone and then worshipping it. The early part of Ibrahim's (as) life helps us to find Allah (swt) using logic.

Du'a for everything good

Ibrahim (as) has taught us to do regular du'a. The Prophet Muhammad (saw) said that supplication (du'a) is worship. Ibrahim (as) constantly turned to Allah (swt), and this is what Allah (swt) wants us to do.

Running between As-Safa and Al-Marwa

How was Hajar (as) to know that her frantic running between two hillocks to find help would become a form of worship for us? If she had known that, she would have done it with a smile! This running between the hillocks is called Sa'ee and it is a requirement for both Hajj and Umrah to complete.

The blessed and holy water of Zamzam that came out of the ground near where Ismail (as) was, is now a part of our worship. Its properties hold the cure to many illnesses, and it is refreshing to the drinker in such hot conditions. Everyone who visits Makkah will always return with Zamzam water with them. It is free, abundant, and will never dry up.

Abu Dharr Al-Ghifaari (ra) heard of the Messenger of Allah (saw) and came to visit him to find out more about him and about his preachings. He came to Makkah and for a whole month, no one would tell him the whereabouts of the Prophet Muhammad (saw). He mentions that all he had was Zamzam for that whole month. Miraculously, he mentioned that folds of fat were showing around his waist! Zamzam water is water like no other and it was like food for him.

Al-Ka'bah, the House of Allah (swt)

Not the house in which Allah (swt) resides, but an important symbol of Tawheed and where all Muslims point themselves towards when they pray Salah. It holds a symbolic position in all of our hearts and is a magnet for the eyes of its beholder. Going around Al-Ka'bah (Tawaaf) is a requirement for Hajj and Umrah. The Prophet Muhammad (saw) also mentioned:

... then I was shown Al-Bait Al-Ma'moor (i.e. Allah's House). I asked Jibreel about it and he said, This is Al-Bait Al-Ma'moor where 70,000 angels perform prayers daily and when they leave they never return to it (but always a fresh batch comes into it daily).' ... (Sahih Al-Bukhari)

Ibrahim (as) pelted Shaytan at three different points. These three different points are called the Jamaraat (Jamrah - singular). It is part of the Hajj that on the three main days (10th, 11th, and 12th Dhul Hijjah), the pilgrims will pelt these three points. The Jamaraat used to be small bits of stone like a pillar, but now they have been expanded and made safer so that more pilgrims can pelt them easily and with little inconvenience.

Just like Ibrahim (as) made a sacrifice, we too are instructed to make one. Every Eid-Ul-Adha, we sacrifice an animal and fulfil this great act of worship. There are great rewards for each sacrifice, and each hair on the animal counts towards good deeds for us. The principle of it is to sacrifice what is beloved to us. Those who farm animals can appreciate it the most. They farm these animals which are a source of income for them, and so they hold a lot of value. We are instructed to choose the best of them and sacrifice them for the sake of Allah (swt). Allah (swt) mentions:

Neither their meat nor blood reaches Allah. Rather, it is your piety that reaches Him. This is how He has subjected them to you so that you may proclaim the greatness of Allah for what He has guided you to, and give good news to the good-doers. (Surah Al-Hajj)

When Ibrahim (as) made the sacrifice, the Angels, Ibrahim (as), and Ismail (as) proclaimed what we proclaim today. It is a reminder of that act of Qurbani as well as proclaiming our belief in the oneness, and Supremity of Allah (swt).

Ibrahim (as) as an individual and what he means to us

Ibrahim's (as) life shows us nothing but devotion to Allah (swt). Everything that he did was to please Allah (swt). His examples of worship were considered so great, that they were mentioned in the Qur'an. These examples are the best examples for us to follow today.