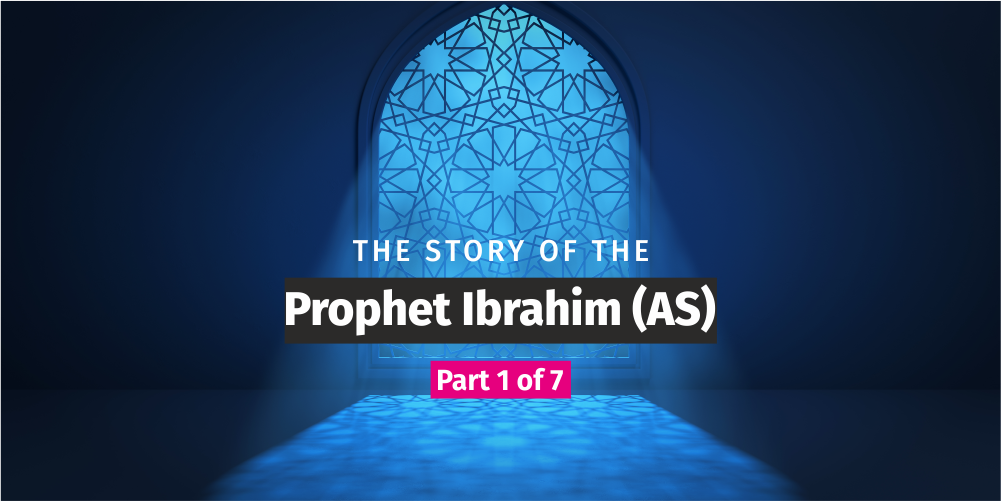 Ibrahim (as) was a great Prophet, and went through incredible tests. His life and forms of worship are applicable today in many ways. Read this seven-part series to get an overview of significant events in his life.

Ibrahim's (as) story began when he was a child. Surrounded by idol-worshippers, Ibrahim (as) found it very uncomfortable to be where he was. His father (some also say it was his uncle) used to make idols for a living and was well-known in the place where they lived. Ibrahim (as) noticed that the idols did not talk, eat, or drink, and they couldn't even stop themselves from falling. People would make these idols, and then start worshipping them. It didn't make any sense at all to him, yet many would come to the idols and start crying and begging in front of the idols in the hope that they would receive some sort of help.

Ibrahim (as) searches for answers

Desperate to ease this confusion about what the people were doing, Ibrahim (as) used to think long and hard about the Earth, the sky, the Sun, the Moon, and the stars. How could the people worship the Sun and Moon as well? They came and went, but never stayed there. Allah (swt) inspired Ibrahim (as) with faith as mentioned in the following verses:

We also showed Ibrahim the wonders of the Heavens and the Earth, so he would be sure in faith. When the night grew dark upon him, he saw a star and said, “This is my Lord!” But when it set, he said, “I do not love things that set.” Then when he saw the Moon rising, he said, “This one is my Lord!” But when it disappeared, he said, “If my Lord does not guide me, I will certainly be one of the misguided people.” Then when he saw the Sun shining, he said, “This must be my Lord - it is the greatest!” But again when it set, he declared, “O my people! I reject whatever you associate (with Allah in worship). I have turned my face towards the One Who has originated the Heavens and the Earth - being upright - and I am not one of the polytheists.” (Surah Al-An'aam)

Ibrahim (as) was guided by Allah (swt) to think that there must a higher power which has created all of these incredible, untouchable things in the sky. And it was this guidance which set the basis for Ibrahim (as) to become to believe in an Originator or Creator who controls everything.

Ibrahim (as) set out debating with the people as well as his father and was responded to with only anger and frustration. Ibrahim (as) was challenging generations of idol worship and the beliefs of the entire community and ancestors. The people were not happy, and his father was beginning to feel resentment towards Ibrahim (as).

Remember when he questioned his father and his people, “What are these statues to which you are so devoted?” They replied, “We found our forefathers worshipping them.” He responded, “Indeed, you and your forefathers have been clearly astray.” They asked, “Have you come to us with the truth, or is this a joke?” He replied, “In fact, your Lord is the Lord of the Heavens and the Earth, Who created them (both). And to that I bear witness.” (Surah Al-Anbiyaa)

Ibrahim (as) challenges his father

Ibrahim (as) was so sure about the existence of Allah (swt), that his faith only increased day by day. Allah (swt) was guiding him, inspiring him, and shaping him into one of the best Prophets of all time. Convinced with his newfound beliefs and logic, Ibrahim (as) confronted his father:

Ibrahim's (as) words were so subtle and full of worry and love for his father. He spoke to him in the best manner, advising him so that maybe he can understand what Ibrahim (as) was trying to say. But his father was fuming.

He replied, “How dare you reject my idols, O Ibrahim! If you do not desist, I will certainly stone you ˹to death˺. So be gone from me for a long time!”. Ibrahim (as) responded, “Peace be upon you! I will pray to my Lord for your forgiveness. He has truly been Most Gracious to me. (Surah Maryam)

Ibrahim (as) had become rejected by his father just like the rest of the community. He was only trying to help them, not for personal gain, but for them to be taken out of the darkness and into the light.

Ibrahim (as) destroys the idols

Concerned that no one was listening to him, Ibrahim (as) decided that he needed to do something big to wake everyone up out of this madness. There was to be a big festival, and all would attend it. This was the perfect time to carry out his plan, a plan that no one knew of except him. Once all of the people had left their homes and attended this festival, Ibrahim (as) came to where all the idols were kept, holding a sharp axe. He planned to question the idols to see if they respond.

He approached the idols and asked them: "Will you not eat this food before you? What is the matter with you that you don't speak?". None of the idols responded. They remained exactly where they were and didn't move the slightest. Ibrahim (as) took his axe and smashed all of them except one. He hung the axe on this final idol in the hope that he could show physical proof of the falsehood of idol worship.