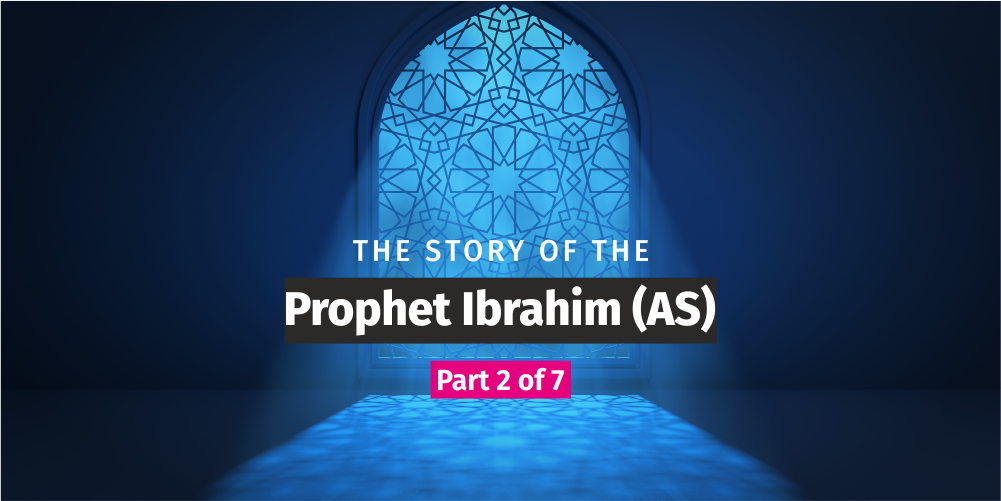 Ibrahim (as) has found Allah (swt), and he is keen to prove it. He is using logic to challenge the idol worshippers, but they can't tolerate it anymore. Find out what happens to Ibrahim (as) in Part 2 of this series.

The idolaters are devasted and want revenge

When the people returned from the festival, they found to their horror, smashed bits of wood and stone. All of their idols had been destroyed completely, except one. Naturally, there was only one who could have done this - the one who didn't attend the festival, and the one who always had been lecturing the people about the falseness of idol worship. Allah (swt) mentions this story in detail:

(Ibrahim (as) said to himself) “By Allah! I will surely plot against your idols after you have turned your backs and gone away.” So he smashed them into pieces, except the biggest of them, so they might turn to it (for answers). They protested, “Who dared do this to our gods? It must be an evildoer!” Some said, “We heard a young man, called Ibrahim, speaking (ill) of them.” They demanded, “Bring him before the eyes of the people, so that they may witness (his trial).” They asked, “Was it you who did this to our gods, O Ibrahim?” He replied, “No, this one - the biggest of them did it! So ask them, if they can talk!” So they came back to their senses, saying (to one another), “You yourselves are truly the wrongdoers!” Then they (quickly) regressed to their (original) mindset (arguing), “You already know that those ˹idols˺ cannot talk.” He criticised (them), “Do you then worship - instead of Allah - what can neither benefit nor harm you in any way? Shame on you and whatever you worship instead of Allah! Do you not have any sense?” They concluded, “Burn him up to avenge your gods, if you must act.” (Surah Al-Anbiyaa)

Ibrahim (as) is thrown into a blazing fire

Ibrahim (as) had failed to convince the people even though everything made sense. They were not willing to give up their traditions or the traditions of their forefathers. They would continue what they are doing as that is what had been normalised to them.

The people decided that they must burn Ibrahim (as), they had had enough. They gathered as much wood as they could as being a service to their false gods. It took days to gather the fuel required and they dug a deep pit in which all of this wood was thrown into. The people even thought that their gods would cure them of diseases and bring them good fortune if they kill Ibrahim (as). The fire was intended to be so big, that they even had to build a catapult to throw Ibrahim (as) into it.

The fire was ignited, and Ibrahim (as) tied up and placed on the catapult. The people stood away and waited patiently for this great service to their false gods to be fulfilled after days of hard work collecting the firewood. The Prophet Muhammad (saw) mentions a statement of Ibrahim (as) before he was thrown into the fire - a statement that we still use today in times of difficulty:

The chief priest gave the order, and Ibrahim (as) was catapulted into this huge fire made just for him. There was no chance of escaping. Ibrahim (as) miraculously descended into the fire calmly, but even though the flames burned, it was made cool and enjoyable for Ibrahim (as) by Allah (swt) as mentioned in the following verse:

We ordered, “O fire! Be cool and safe for Ibrahim!” They had sought to harm him, but We made them the worst losers. (Surah Al-Anbiyaa)

Allah (swt) had saved Ibrahim (as) from an unimaginable death. Ibrahim (as) was in a cool garden even though everyone thought he was being burned. He glorified and thanked Allah (swt) for saving him. His faith increased even more, and he had nothing but love for His Lord.

Ibrahim (as) emerged from the burning fire unharmed and looking surprisingly well. The people were shocked, and it caused some of them to question what the truth is. How could it be that someone could survive such a fire? Some of the people believed in Ibrahim (as) and became Muslims, whereas the majority of them remained in disbelief of Allah (swt).