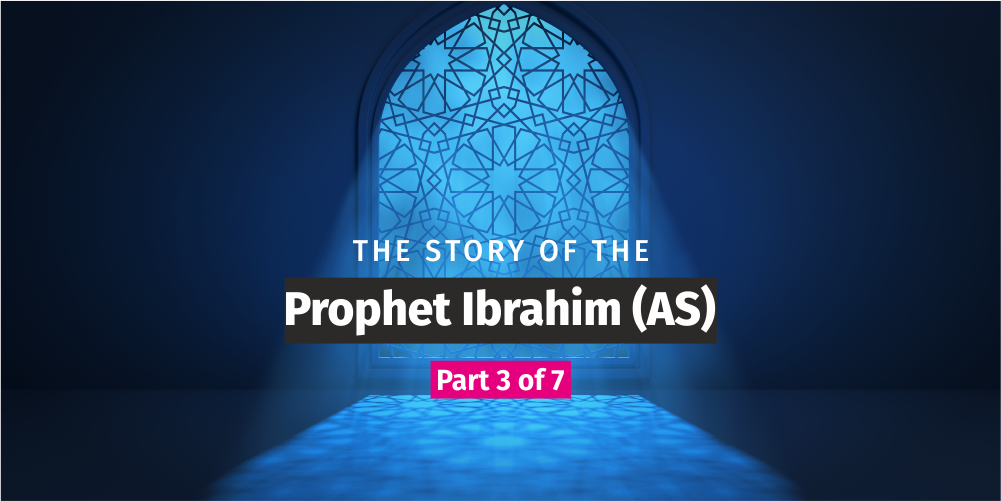 Ibrahim (as) is finally blessed with a child, but now he must do something really difficult. But Allah (swt) has better plans for him and his baby son. Read Part 3 of this series on the life of Ibrahim (as).

Ibrahim's (as) wife Saarah (as) cannot have children

Ibrahim (as) married a woman called Saarah (as) and they travelled together, inviting people to Islam. They loved each other very much, but they didn't have any children of their own. Ibrahim (as) and his wife attempted to have children but they couldn't. Like anyone else, Ibrahim (as) wanted his lineage to continue, and for him to have righteous children, even Prophets. They tried for many years and were never successful.

Ibrahim (as) debates with Namrood (Nimrod)

Namrood took a liking to Saarah (as) and reached out to her, but then his hand got stiff and he couldn't do anything. He asked her to pray to the real Lord to help him and he would not harm her. So she did, and Namrood's hand went back to normal. But being a tyrant and evil man, he tried again, and the same thing happened. Again, he asked Saarah (as) to pray for him with the promise that he would not harm her. So she prayed, and Namrood returned to his normal state again. Confused and bewildered, he exclaimed that Saarah (as) was not a human, but a devil. Namrood gave her a maidservant called Hajar (also sometimes known as Hajra (as)).

Abu Hurayrah (ra) - one of the companions of the Prophet Muhammad (saw) - who narrated this story adds at the end, that Hajar (as) is the mother of the people of Makkah (i.e. the Quraysh) since through her continued the lineage of Ibrahim (as), and the Quraysh were descendants of Ibrahim (as).

Ibrahim (as) marries Hajar (as) and gives birth to Ismail (as)

Ibrahim (as) sets out on a journey to a sacred land

Ismail (as) was still a baby at the time whilst his parents prepared to take him on a long journey. He was still being nursed and had not yet weaned. They eventually reached a barren valley, which had no water, no food, and no people. Ibrahim (as) handed over a small amount of food and water, and then turned around and walked away.

Saarah (as) was surprised that Ibrahim (as) was doing such a thing and asked where he was going. He didn't reply. She asked again, and again, he didn't reply. Then she asked him: "Did Allah command you to do so?". He replied: "Yes". She replied with confidence that if Allah (swt) had commanded him to do this, she would have no issues as He (swt) would help and protect her and her child.

Ibrahim (as) reached a point where he could no longer physically see his beloved wife and only child, and then he turned to Allah (swt) and did du'a as mentioned in the Qur'an:

Our Lord! I have settled some of my offspring in a barren valley, near Your Sacred House, our Lord, so that they may establish prayer. So make the hearts of (believing) people incline towards them and provide them with fruits, so perhaps they will be thankful. (Surah Ibrahim)

This Sacred House that Ibrahim (as) mentioned is what we know today as the Ka'bah which is in Makkah. The whole area of Makkah had always been a sacred land. At the time it was just a barren valley, yet in Islam, it is considered the to be the holiest of all places on Earth. The Ka'bah was not built at this time, but some years later, it was built by Ibrahim (as) and his son Ismail (as).

After leaving his wife and only child in a barren land, Ibrahim (as) called to Allah (swt) regarding three things:

It is amazing to just think that what we are taught today is the complete opposite of what Ibrahim (as) asked from Allah (swt). We are taught that firstly, we must survive, then we need people to love us and feel safe, and then we eventually reach a state where ethics, rules, and spirituality can be achieved. This contemporary teaching contradicts Ibrahim (as). The heart, mind, and body are nothing if it doesn't have belief and faith in Allah (swt). Submission to Him (swt) is the only form of salvation, and having this belief in Him (swt) allows us to reach 'self-actualisation' quicker than those who follow the contemporary approach. Allah (swt) demands that we submit to Him (swt), and He (swt) will look after everything else, as we will see in the next part in shaa Allah.