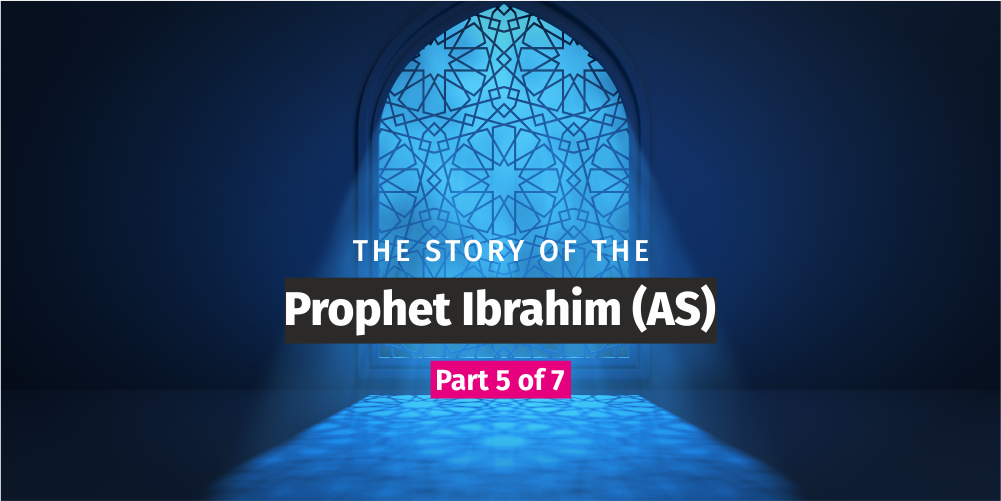 Ibrahim (as) and his son Ismail (as) work together to build the Sacred House of Allah (swt) - Al-Ka'bah. Working together, they complete this centrepiece and symbolic building, representing Tawheed - the Oneness of Allah (swt).

Ibrahim (as) leaves his second wife and only child in a barren valley, which has no food or water. He prays for them, and Allah (swt) grants his family water, food, and protection.

Ibrahim (as) visits his son Ismail (as) and builds Al-Ka'bah

Ibrahim (as) prays to Allah (swt)

While building Al-Ka'bah, both Ibrahim (as) and his son Ismail (as) kept doing du'a to Allah (swt):

And (remember) when Ibrahim raised the foundation of the House with Ismail, (both praying), “Our Lord! Accept (this) from us. You are indeed the All-Hearing, All-Knowing." (Surah Al-Baqarah)

In the next verse, Ibrahim (as) makes an important and special du'a for those who come after him. He supplicates:

"Our Lord! Make us both (fully) submit to You and from our descendants a nation that will submit to you. Show us our rituals, and turn to us in grace. You are truly the Accepter of Repentance, Most Merciful." (Surah Al-Baqarah)

Ibrahim (as) is thinking about his descendants. He wants them to be good, pious people who submit to Allah (swt). It is important to note that Islam means 'submission to Allah (swt)'. So a Muslim is one who has submitted himself or herself to Allah (swt). Allah (swt) mentions in the Qur'an:

Ibrahim was neither a Jew nor a Christian; he submitted in all uprightness and was not a polytheist. (Surah Aal-'Imraan)

One of the greatest characteristics of Ibrahim (as) is that whenever he is mentioned in the Qur'an, there is some du'a that he made. Ibrahim (as) was excellent in turning to Allah (swt), asking his Lord for anything and everything. This is the true example of the one who puts his trust in Allah (swt) and seeks His help alone. Ibrahim (as) makes a beautiful du'a:

"Our Lord! Raise from among them a Messenger who will recite to them Your revelations, teach them the Book and wisdom, and purify them. Indeed, You (alone) are the Almighty, All-Wise.” (Surah Al-Baqarah)

Ibrahim (as) is asking for a Messenger to come from his descendants, who would recite Qur'an to the people and teach them, and purify them. After Ismail (as), his lineage continued, but there were no Prophets until the last and final Prophet, Muhammad (saw) came.

The second son of Ibrahim (as)

It is important to note that Ibrahim (as) later had a second son, Ishaaq (as). Ishaaq (as) was born to his first wife Saarah (as). One day, three angels came to Ibrahim (as) and gave him the good news of a child. Saarah (as) was astonished to hear that in such an old age, she would conceive a child. But, what Allah (swt) wills, He can make it happen.

From her child Ishaaq (as), who became a Prophet too, many Prophets came. Just a few of them whom we know about include Ya'qub, Yusuf, Musa, Haroon, Yusha bin Noon, Dawood, Sulayman, Yahya, Zakariyya, 'Eesa, may Allah (swt) send His peace and blessings on all of them.