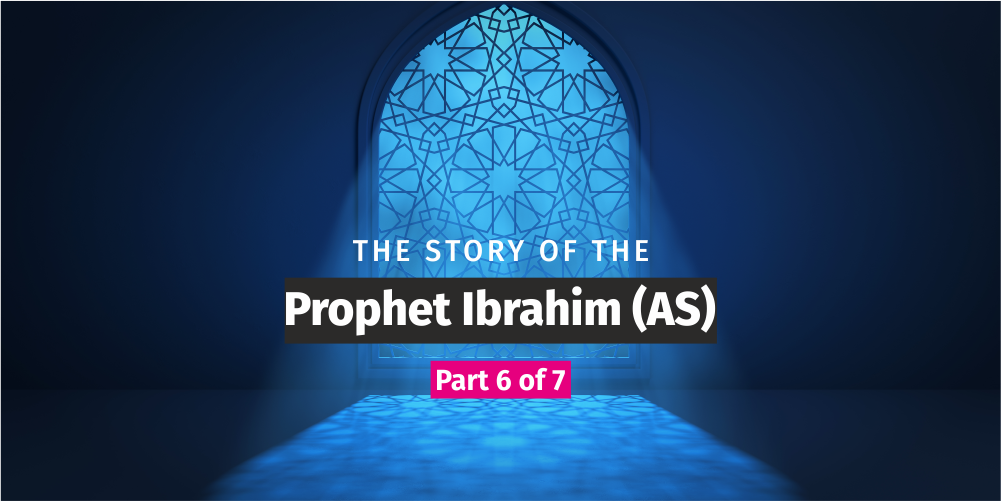 Ibrahim (as) is to undergo one of his hardest tests yet. He must sacrifice his only son, whom he loved so dearly. But the command from Allah (swt) has to be fulfilled. He asks his son what to do. Read on in Part 6 to find out what happens.

Ibrahim (as) with his son Ismail (as) builds Al-Ka'bah, the most sacred building on Earth, and the centre of worship for all Muslims worldwide.

Ibrahim (as) has a dream

Ibrahim (as) saw in a dream that he was sacrificing Ismail (as). He knew that this was a command from Allah (swt). As a devout Muslim, Ibrahim (as) could not imagine defying Allah (swt). In the Qur'an, this story is mentioned:

"My Lord! Bless me with righteous offspring.” So We gave him good news of a forbearing son. (Surah As-Saaffaat)

Ibrahim (as) did du'a for a son as he had no children, and Allah (swt) blessed him with one. Then he had to leave his beloved son in a barren valley, and he did that. The Qur'an continues:

Then when the boy reached the age to work with him, Ibrahim said, “O my dear son! I have seen in a dream that I {must) sacrifice you. So tell me what you think.” He replied, “O my dear father! Do as you are commanded. Allah willing, you will find me amongst the patient ones.” (Surah As-Saaffaat)

Ibrahim (as) knows that he must sacrifice his only son, but instead of just doing it, he tells Ismail (as). Ismail (as) being the son of one of the most devout people in the history of mankind, was also a strong, and devout Muslim. He also had trust and a firm belief in Allah (swt). He showed that the commands of Allah (swt) cannot be disobeyed and that the one who throws themselves into difficulty for the sake of Allah (swt) will never be neglected. So he instructs his father to do as he was instructed.

Ibrahim (as) and Ismail (as) make their way to the place of sacrifice. As servants of Allah (swt), they know they must do what was commanded to them, even if they don't want to do it. This is the principle of submission that Allah (swt) is teaching us about.

Ibrahim (as) attempts to sacrifice Ismail (as)

Allah (swt) continues in the Qur'an mentioning the story:

Then when they submitted (to Allah’s Will), and Ibrahim laid him (Ismail) on the side of his forehead (for sacrifice). We called out to him, “O Ibrahim! You have already fulfilled the vision.” Indeed, this is how We reward the good-doers. That was truly a revealing test. And We ransomed his son with a great sacrifice, and blessed Ibrahim (with an honourable mention) among later generations. “Peace be upon Ibrahim.” This is how We reward the good-doers. He was truly one of Our faithful servants. (Surah As-Saaffaat)

Allah (swt) mentions in these verses that He blessed Ibrahim (as) (with an honourable mention) among later generations. There are many ways in which we honour Ibrahim (as). We can see that in this series, many of the acts of Hajj are derived from the actions of Ibrahim (as). We also mention the name of Ibrahim (as) and his family when we recite Durood Ibrahimi in our Salah.

The origin of Tasbeeh Tashreek

For three days during Eid-Ul-Adha, it is an emphasised Sunnah to recite Tasbeeh Tashreek: