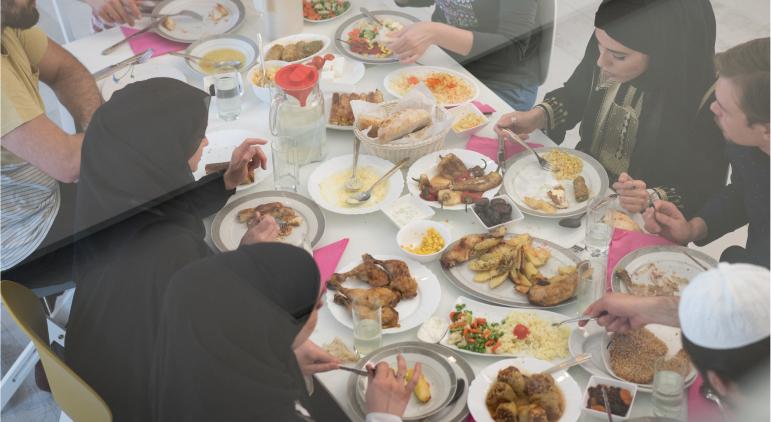 All Muslims, as well as the majority of those who aren’t, are aware that Ramadan is the month of fasting, otherwise known as sawm. This is when Muslims around the world abstain from eating and drinking during sunlight hours as they seek to become closer to Allah (SWT).

There are many rules for fasting during Ramadan, not all of which are centred around the act of observing sawm itself. One such rule is when Muslims sit and eat two meals together before and after the day’s fast – known as suhur and iftar.

What is Suhur? Suhur is the pre-dawn meal, which changes day by day depending on the time of sunrise. This is the meal that families share together, where they will usually eat foods packed full of nutrients and provide a long-lasting energy boost – particularly important for when Ramadan falls during the summer months and the days are longer. The sunlight hours at the peak of summer can mean that Muslims are sitting down to eat the Suhur meal only a few hours after Iftar.

Iftar, the evening meal, is when Muslims come together to break the day’s fast after sunset. Because of this, there is no set time for Iftar as it will change day by day depending on the time of sunset. There are no rules for what a Muslim can and cannot have for the Iftar meal, though it is traditional to first break the fast by eating dates, as it is believed that this is how the Prophet Muhammad (SAW) broke his fast. Once the fast-breaking time has passed, Muslims are free to indulge in Ramadan food and drink, as well as engage in sexual activity, up until sunrise.

What is Included in the Ramadan Fast?

There are rules that come with fasting during Ramadan. Abstaining from food and drink are the most widely known aspects of the fast, but this is not the be-all and end-all of sawm, with Muslims also refraining from sexual activity, cursing, impure thoughts, and negative feelings (such as anger and jealousy). This is a time of self-reflection and personal development.

Muslims use this as a time to slow down, which is why many Islamic countries opt for flexible working hours to accommodate the fast and shops will remain open after sunset, even during the middle of summer when the days are long. Instead, many Muslims use this as an opportunity to increase their daily prayers to Allah (SWT), as well as reciting the Holy Qur’an from beginning to end.

Children who would otherwise not be expected to partake in the fast (as this is not obligatory until the age of puberty) are encouraged to increase their learning of Islam and why it is that we observe sawm during Ramadan. It is also common for parents to encourage older children to take part in the fast either on selected days or during the morning or afternoon as a means of preparing them for Ramadan when they are of an age when they are expected to fast.

As per the rules of fasting in Islam, Muslims are required to pay either Fidya or Kaffarah, depending on whether sawm has been broken for a valid reason or not. Fidya, usually set at around £5 per day, is a donation to feed a fasting person two meals of the day. It is payable by Muslims who cannot fast for an acceptable reason (such as on medical grounds, a pregnant/breastfeeding/menstruating woman, or someone who is too old and/or frail to fast throughout the day).

Kaffarah for not fasting in Ramadan is a penalty for missing a fast without a valid reason or for breaking a fast deliberately. Kaffarah provides a person with two meals a day for 60 days. This is set at £300. Alternatively, instead of making the payment, a Muslim can choose to observe a 60-day continuous fast (although it is not permissible to fast during the Eid celebrations that come following Ramadan).

As well as fasting during Ramadan, Muslims will also make an obligatory charitable payment known as Zakah-ul-Fitr (otherwise known as Fitrana). This can be paid to ILM, who will ensure that your Fitrana payments are distributed in accordance with the Qur’an.