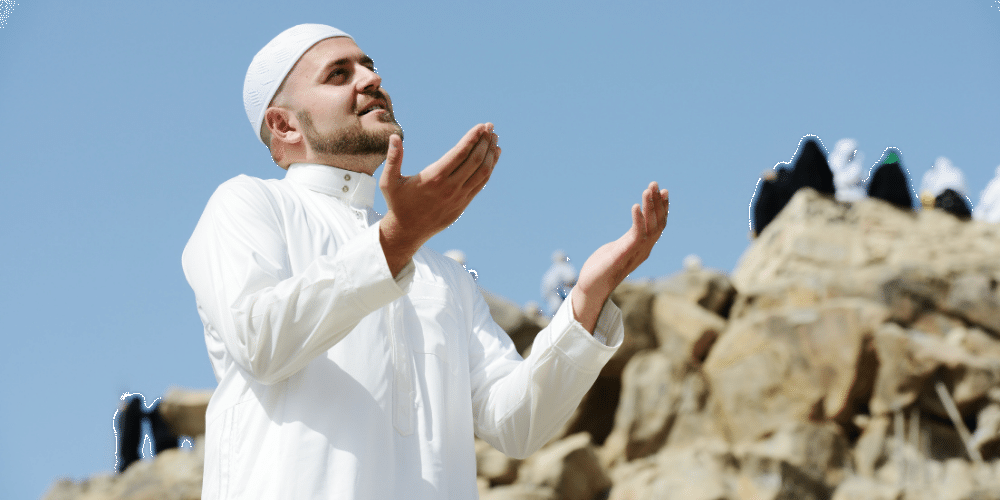 The Day of Arafah is the most special day of the year and falls in Dhul Hijjah during the days of Hajj. The pilgrims will be on the plains of Arafat, seeking forgiveness from Allah (swt). But this is also an opportunity for all Muslims to make the most of this important day, the day before Eid Ul Adha.

This year, the Day of Arafah is expected to be on the 8th or 9th of July 2022. It is the most important day, especially for the pilgrims who have made their way to perform Hajj. There is no Hajj complete without staying and worshipping in Arafah and it falls in the Islamic calendar on the 9th of Dhul Hijjah. You can read more about Hajj here.

Arafah is the best day of the whole year

Arafah is a very special day. In fact, Dhul Hijjah is one of the four sacred months of the year, so out of all of the months, Dhul Hijjah is in the top four. And out of these four months, the first ten days of Dhul Hijjah are the best. And out of these first ten days, the Day of Arafah is the best. This is not to be confused with the last ten nights of Ramadan as these are the best nights of the year of which Laylatul Qadr is the best of those nights.

The Prophet Muhammad (saw) said: "‘There are no days greater and more beloved to Allah than these (first) ten days of Dhul Hijjah". (Musnad Ahmad)

Shaytan is in anguish and misery on the Day of Arafah like no other day, because of years of hard work causing Muslims to accumulate major and minor sins that are all undone on this one day.

The Prophet Muhammad (saw) said: "There is no day when Allah (swt) sets free more servants from Hell than the Day of Arafah. He draws near, then praises them to the angels, saying: What do these want?" (Saheeh Muslim)

The day when Islam was perfected and it's rulings completed

A Jew said to `Umar (ra): "If this verse had been revealed to us, we would have taken it as an Eid: 'This day, I have perfected your religion for you, completed My favor upon you, and have chosen for you Islam as your religion.' (Qur'an 5:3)". Umar said: "I know the day when it was revealed and the night on which it was revealed: a Friday night when we were with Messenger of Allah in Arafat." (Sunan An-Nasaai)

From this Hadeeth, we can understand that Islam, its rulings, its worship, and understanding of how to practice this religion was completed on the Day of Arafah, and Allah (swt) chose this special day to do that. Similarly, of the best nights, Allah (swt) chose to reveal the Qur'an on the 27th night of Ramadan.

What can the Muslims who are not performing Hajj do on this day?

Whilst millions will be performing Hajj this year, the vast majority of Muslims will not be. There are several ways to make the most of this special day which include:

“Fasting on the Day of ‘Arafah, I hope from Allah, expiates for the sins of the year before and the year after.” (Sunan Ibn Maajah)

It is important to note that for the pilgrims, it is forbidden to fast on the Day of Arafah, as the Prophet Muhammad (saw) forbade it. The two Eids (Eid Ul Fitr and Eid Ul Adha) are also days that are forbidden to fast in. For the pilgrims, they should not fast throughout the days of Hajj, but they can fast the first few days before (i.e. 1st to 7th Dhul Hijjah). For those who are not performing Hajj, fasting from the 1st to the 9th Dhul Hijjah is a great way of accumulating good deeds as well as removing bad deeds.

Just because we are not performing Hajj, doesn't mean that Allah (swt) won't forgive us. Regardless of the time, day, or place, we can ask for His forgiveness at any time. However, being in the state of fasting, it is worship from Fajr until Maghrib. This is a good time to ask for forgiveness, to contemplate on our sins, to think more about the Hereafter, and to sincerely repent.

Dhikr (remembering Allah (swt) through praising and glorifying Him) is one of the most excellent ways of removing sins. Here are just a few Ahadeeth on the excellence of Dhikr:

The Prophet Muhammad (saw) said: "The uttering of the words: "SubhanAllah (Allah is free from imperfection), Alhamdulillah (all praise is due to Allah), La ilaha illAllah (there is no true god except Allah) and Allahu Akbar (Allah is the Greatest)' is dearer to me than anything over which the sun rises." (Saheeh Muslim)

The Prophet Muhammad (saw) said: "He who utters a hundred times in a day these words: 'La ilaha illAllahu, wahdahu la sharika lahu, lahul-mulku wa lahul-hamdu, wa Huwa 'alaa kulli sha'in Qadeer (there is no true god except Allah. He is One and He has no partner with Him; His is the sovereignty and His is the praise, and He is Omnipotent),' he will have a reward equivalent to that for emancipating ten slaves, a hundred good deeds will be recorded to his credit, hundred of his sins will be blotted out from his scroll, and he will be safeguarded against the devil on that day till the evening. And no one will exceed him in doing more excellent good deeds except someone who has recited these words more often than him. And he who utters: 'SubhanAllahi wa bihamdihee (Allah is free from imperfection and His is the praise)' one hundred times a day, his sins will be obliterated even if they are equal to the extent of the foam of the ocean." (Saheeh Bukhari & Saheeh Muslim)

Abu Musa said: The Messenger of Allah (saw) said to me, "Shall I not guide you to a treasure from the treasures of Jannah?" I said: "Yes, O Messenger of Allah!" Thereupon he (saw) said, "(Recite) 'La hawla wa la quwwata illa billah' (There is no change of a condition nor power except by Allah)." (Saheeh Bukhari & Saheeh Muslim)

Do du'a (supplication) in abundance

An excellent way to do du'a is to be really specific. For example:

Here are the common ways to do du'a like the above which are not so comprehensive:

As difficult as the comprehensive du'a above may seem, it is important to engage in the du'a as much as possible. It is not just like you are talking to Allah (swt), you actually are! When you say "O Allah!", He (swt) responds to you and asks you what you need! He (swt) is always there for you, but He (swt) wants you to turn to Him (swt) and ask of Him (swt). His treasure chest is not limited, and He (swt) is the only Helper. So don't be afraid, think about what you really want, and you will that you will connect with Allah (swt) in a way like no other.

Allah (swt) says: 'Say (O Prophet), that Allah says, “O My servants who have exceeded the limits against their souls! Do not lose hope in Allah’s mercy, for Allah certainly forgives all sins. He is indeed the All-Forgiving, Most Merciful."' (Qur'an 39:53)