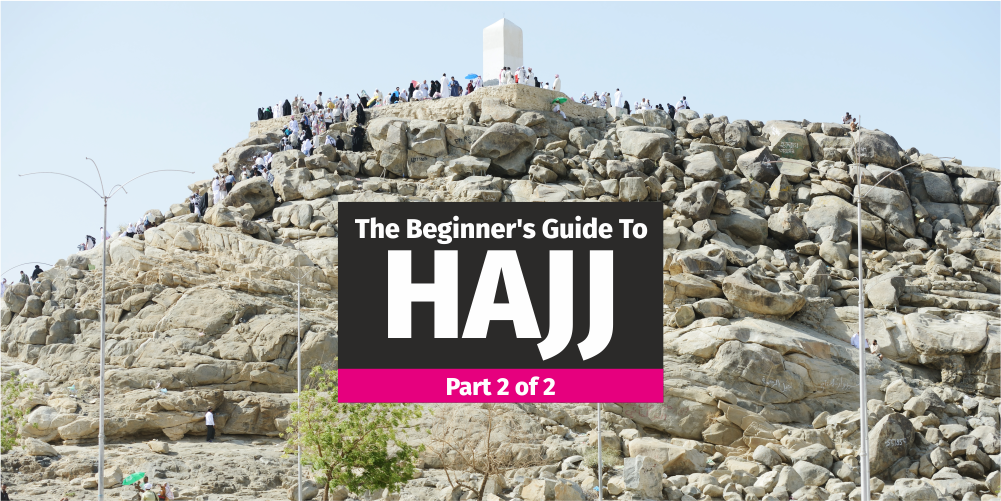 Following on from Part 1, we continue with this beginner's guide to cover the major acts of worship during Hajj.

When it reaches the time of Maghrib, the prayer will not be performed, but preparations to leave Arafah will be made to go to Muzdalifah. When the pilgrims reach Muzdalifah, they will combine Maghrib and 'Ishaa and pray them one after the other. The night will be spent in Muzdalifah until Fajr, and it is recommended that the pilgrims worship and do du'a throughout the night. Muzdalifah conveniently has lots of small stones and pebbles which can be used in stoning the Jamaraat. It is important to only collect small stones, but ones that can be thrown a distance too.

After praying fajr the following day (10th Dhul Hijjah), the pilgrims will make their way back through Mina and to the opposite side where the Jamaraat are. These are three pillars, which represent where Shaytan came to prevent Ibrahim (as) from sacrificing his son Ismail (as). There are three pillars in total and the last one is the biggest. Seven pebbles must be thrown at the last pillar before proceeding on, each time reciting "Bismillahi, Allahu akbar".

There is usually an option if you want to do the Qurbani yourself, but normally the tour guide arranges it. Qurbani is a requirement of Hajj, and after stoning the biggest Jamrah, pilgrims will go to arrange the Qurbani. It consists of sacrificing an animal such as a cow, sheep, camel, ram, goat, etc. Those who get Qurbani organised by their tour guides can either return to Mina after stoning the Jamrah, or they can proceed to Makkah. The 10th of Dhul Hijjah is Eid-Ul-Adha for everyone else around the world, but for the pilgrims, it is known as Yawm An-Nahr (The Day of Sacrifice).

After the Qurbani is complete, pilgrims can choose to continue to Makkah to do the Tawaaf, or shave their heads and remove the Ihraam. The Ihraam cannot be removed until the head is shaved (there are several rules permitted for shaving/trimming).

Quite commonly, pilgrims will make their way to Makkah straight after stoning the Jamrah, where they will do the Tawaaf, followed by the Sa'ee, and the tour guide will arrange the Qurbani. Both need to be done at some point on the 10th, 11th, or 12th Dhul Hijjah. Following this, they await news of the Qurbani being done on their behalf, and then they shave their heads and remove their Ihraam.

Tawaaf consists of walking (and in some places jogging) around Al-Kabah for seven rounds. The seven rounds need to be complete, starting from the corner where Hajr Al-Aswad (the Black Stone) is, and ending here too. It is important to remember how many times one has gone around Al-Ka'bah as doing less than required will invalidate it. It is difficult to kiss the Black Stone, so raising the hands towards it (from far), followed by kissing the hands is sufficient. Throughout the Tawaaf, it is important to keep doing du'a to Allah (swt) and praise Him.

After the Tawaaf, the pilgrims proceed to run between As-Safa and Al-Marwa. Starting at As-Safa, seven small journeys between the two hillocks will be made, ending at Al-Marwa. In between the two hillocks, there is a small zone where it is recommended to run or jog, and the remaining can be a walk. Almost in the middle, there are taps connected directly to the well of Zamzam. Pilgrims can help themselves to refreshing, holy water. In the Story of Ibrahim (as), we mentioned how an Angel came and dug this well when Hajar (as) ran between the hillocks. Throughout the Sa'ee, it is important to keep doing du'a to Allah (swt) and praise Him.

If the pilgrims haven't done so already, they would shave their heads, remove the Ihraam, freshen up, and return to Mina. This is still the 10th of Dhul Hijjah, and they must now return to stay in Mina for a further two nights. It is important to return as soon as possible to Mina and the night must be spent there.

Stoning the Jamaraat on the 11th of Dhul Hijjah

After staying the night in Mina, and praying Fajr and Dhuhr the next day on the 11th of Dhul Hijjah, the pilgrims will make their way to the Jamaraat. This time they will throw stones at all three of the Jamaraat. Starting with the first Jamrah, they will say "Bismillahi, Allahu akbar" each time a stone/pebble is thrown. Following the first Jamrah, the pilgrims approach the second one and throw another seven stones. Then the third Jamrah, and throw the last set of seven stones. The act of 'Ramee' Ul-Jamaraat' has now been completed, and the pilgrims return to their camps in Mina

Stoning the Jamaraat on the 12th of Dhul Hijjah

The next day, again after Dhuhr, the pilgrims make their way to the Jamaraat and do the same as what they did the previous day. Seven stones are thrown on the 10th, 21 stones on the 11th, and 21 stones on the 12th of Dhul Hijjah equating to 49 stones required in total. Following the Jamaraat, the major acts of Hajj are now complete and the pilgrims can return to their hotels. Some continue to the 13th of Dhul Hijjah and do an extra day. This is also valid, but most finish their Hajj on the 12th of Dhul Hijjah.

Hajj is a difficult act of worship, and it is required that people be in good health when they go. Unfortunately, people have a number of reasons why they don't do Hajj until they are much older. These include:

For some people, it is because they cannot afford it, and we must be careful how we address those who haven't done Hajj. However, it is important to understand that doing Hajj at an old age is difficult, we don't know how long we will live, and Hajj is becoming more and more expensive. Therefore, it is strongly advised for those who are able to do Hajj, to fulfil this pillar of Islam at the earliest stage in life.